What our customers say

"The service we have received from A.S.K has been excellent and beyond expectation. Adam has been reliable, thorough and efficient and I have had no hesitation in recommending him to friends and family." 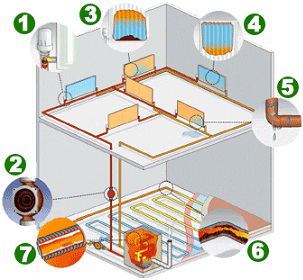 The objective is to restore systems with circulation and boiler noise problems (caused by sludge and corrosion deposits) to optimum operation. Power flushing removes these deposits and the problems that they cause.

It is prudent to power flush a heating system immediately before fitting a new boiler to an existing system to remove excess flux, swarf and other debris and the grease / oil used to prevent rusting of components before use, thus preventing possible future problems. Many systems are found to contain corrosion and sludge, even if no flow problems have yet shown themselves.

Existing debris is often mobilised by alterations to the system/piping and the increased efficiency of the new boiler, and may then accumulate in the boiler heat exchanger, causing noisy operation, reduced efficiency and, in extreme circumstances, failure of the boiler. The high efficiency and compactness of modern boilers, developed to minimise fuel costs and pollution, means that they are more susceptible to problems caused by debris in the system water.